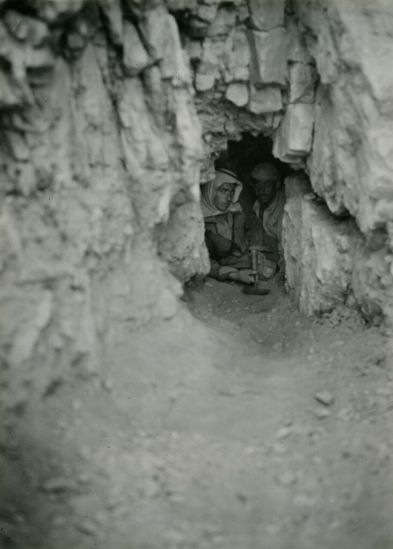 Following the excavations of Cave 1Q (originally designated as the ‘Dead Sea Scrolls Cave’, ‘Qumran Cave’, or ‘Ain Feshkha Cave’) in 1949 and the Murabba’at caves in January-February 1952, a new cave with manuscript fragments was discovered by local Bedouin and manuscript materials were put up for sale by Khalil Iskander Shahin (Kando), an antiquities dealer in Bethlehem. The Director of the Department of Antiquities in Jordan, Gerald Lankester Harding, went with William L. Reed, Director of the American School of Oriental Research (ASOR), Dominique Barthélemy, from the École Biblique et  Archéologique Française (ÉBAF), and Joseph Saad, from the Palestine Archaeological Museum (PAM), to identify this cave, which was subsequently designated as Cave 2Q.

At the behest of Harding an expedition group was then assembled to search for further caves in the vicinity of Khirbet Qumran, and this work took place from 10 to 29 March, 1952. This was a joint institutional survey and excavation comprised by seven teams under the co-directorship of William Reed of  the American School of Oriental Research in Jerusalem, and Roland de Vaux for the École Biblique.  Individual survey teams were led by William Reed, Dominique Barthélemy, Joseph T. Milik and Henri de Contenson, along with Ibrahim Asouly and Azmeh Khalil of the Palestine Archaeological Museum. Hassan Awad, who had previously been with them in Murabba’at, supervised a group of 24 Bedouin. A region from 1 km south of Ras es-Feshkha to the Hadjar el-Asba in the north (an 8 km stretch) was divided into sectors. Although by no means exhaustive, the teams investigated approximately 270 caves or crevices, finding archaeological remains, including pottery, in 40 of these.

Teams were each given an alphabetic designation from A to G, and took notes in the field with their own numeration. Subsequently these notes were pooled into a systematic system of identifying the caves, for the sake of publication (i.e. GQ1-GQ40), running north to south. These caves are plotted on a map published in DJD III, drawn by Jack Ziegler of ASOR. 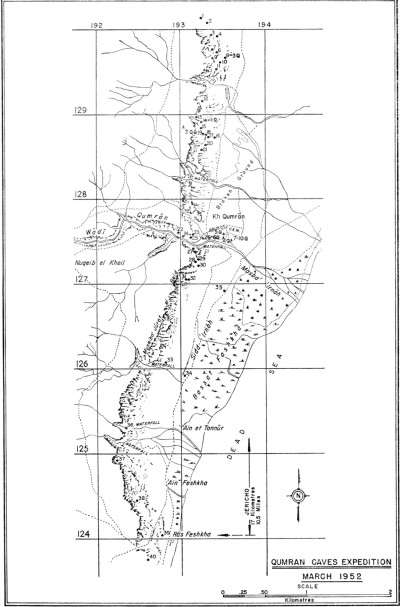 The work of this joint project and subsequent further information on its records has been published in:

For further information see also :
Fidanzio, Marcello ed. (2016). The Caves of Qumran: Proceedings of the International Conference, Lugano 2014 (Studies on the Texts of the Desert of Judah 118; Leiden and Boston: Brill).

A number of photographs were published in DJD III and subsequently in Humbert and Chambon 1994. However, these photographs were not all that were taken during the course of the work. Some photographs taken by William Reed and captioned in line with his observations in the field have remained unpublished. Fortunately, his collection has been digitised for the archival resources of the American Schools of Oriental Research. The collection (insofar as it survives) has been made available to the Leverhulme-funded International Network for the Study of Dispersed Qumran Caves Artefacts and Archival Sources (DQCAAS) to display on our website by permission of ASOR archivist Cynthia Rufo-McCormick, to whom we are very grateful.

In our presentation of the photographs, the original captions by Reed are accompanied by additional comments provided by Joan Taylor, Dennis Mizzi and Marcello Fidanzio. If anyone has further information about the persons in the photographs or data regarding what is shown in the images please let the DQCAAS team know.

Copyright Status: This collection contains photographs from the 1952 exploration of the Qumran Caves, following the initial discovery of the Dead Sea Scrolls. These images have been shared with the Network. To reproduce or publish these images, please contact archives@asor.org.

When referring to, or citing, any of these images (or details from them) please identify the American Schools of Oriental Research Archives, Coll. 005 ASOR Photograph Collection, Qumran Photographs, 1952.