Original caption: Kh. Qumran and Wadi Qumran and north shore of Dead Sea as viewed from a point 10 metres south of E4. 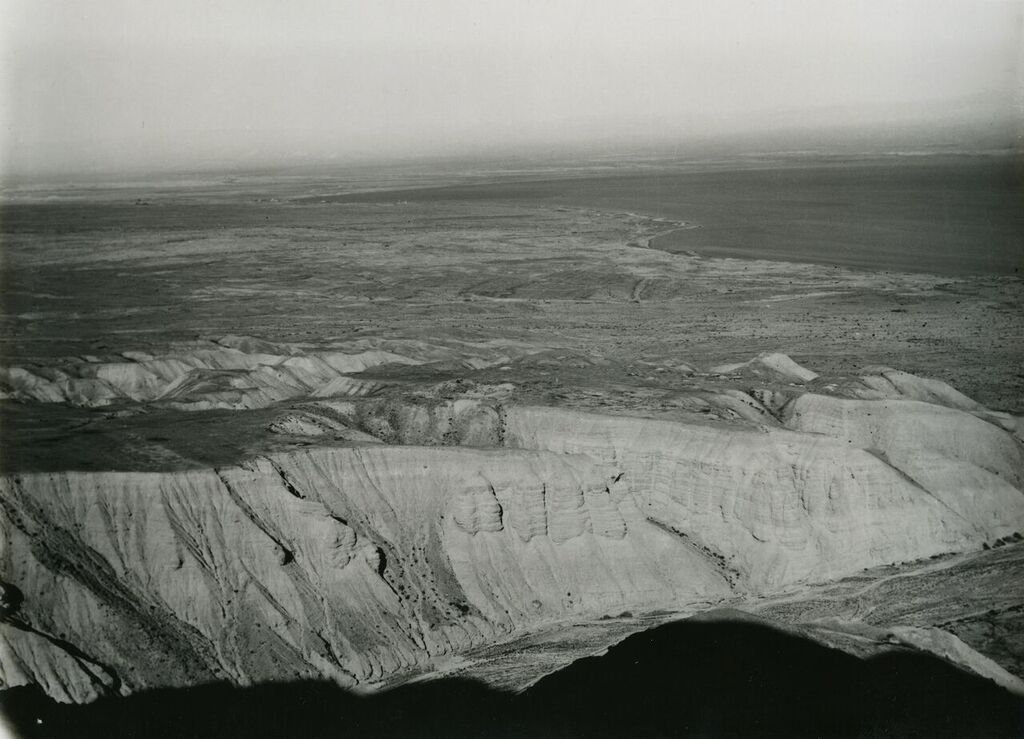 Comment:  The caption on this photograph provides help with the identification of Cave GQ29 as it is specified that it is taken precisely 10 m. south of it. This view over Qumran from the hills on the other side of the wadi (taken when the sun is going down in the west, behind the photographer) is particularly interesting given that caves 4Qa, 4Qb, 5Q, 7Q-10Q, all carved out of the marl spurs below the Qumran plateau, were not yet found. One can nevertheless clearly see an overhang of the ‘window’ of cave 4Qa, which faces southwards, and also the second ‘window’ of the cave which looks west towards Cave 4Qb. However, the ‘window’ to the west from Cave 4Qb is covered over. This marl cave 4Qa was then at least recognisably a cavity at the time. On the other side of the ravine one can see no traces of Cave 7Q-9Q. On the plateau one can see the spread of the cemetery and also the long wall separating the buildings from the burial area. The site of Kh. Qumran has not been much excavated and the tower area is a mound of rubble. This coheres with de Vaux’s field notes. While he directed excavations from 1951, that year from 24 November to 12 December he was able only to make some small soundings: in loci 1-4, located to the south of the tower area, 5-6, on the north-eastern corner, and 7, a location just to the west of the tower (Humbert and Chambon 1994: 292-4). Note the higher level of the Dead Sea than today. The view looks towards the north of the Dead Sea, with the Kalia hotel, jetty and bathing beach alongside the shoreline, and the workshops of the Palestine Potash Company beyond. One can also see the marl ravines just to the north of the ruins, which are contextualized nicely in this picture.

THE ASOR COLLECTION CONTAINS PHOTOGRAPHS FROM THE 1952 EXPLORATION OF THE QUMRAN CAVES, FOLLOWING THE INITIAL DISCOVERY OF THE DEAD SEA SCROLLS, WHICH HAVE BEEN SHARED WITH MEMBERS OF THE DQCAAS NETWORK.

TO REPRODUCE OR PUBLISH THE ABOVE IMAGE, PLEASE CONTACT ARCHIVES@ASOR.ORG.

WHEN REFERRING TO, OR CITING, ANY OF THESE IMAGES PLEASE CREDIT THE AMERICAN SCHOOLS OF ORIENTAL RESEARCH ARCHIVES, COLL. 005 ASOR PHOTOGRAPH COLLECTION, QUMRAN PHOTOGRAPHS, 1952.