Cave 11Q is the only cave that has remained unpublished out of all those where manuscripts were found in the 20th century. It was discovered by Ta’amireh Bedouin in early 1956 and excavations were carried out in the same year by Gerald Lankester Harding and Roland de Vaux. In 1988, the cave was excavated again by Joseph Patrich and most recently (2017) by Marcello Fidanzio and Dan Bahat.

The DQCAAS network has actively contributed to this publication, with all its members: Marcello Fidanzio is director of the Qumran Caves Publication Project and co-editor of the volume, Joan Taylor and Dennis Mizzi are authors of studies on archaeological materials. This volume includes important results of radiocarbon dating of textiles funded by DQCAAS. 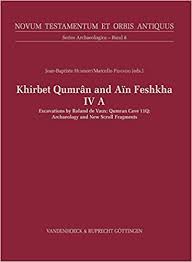 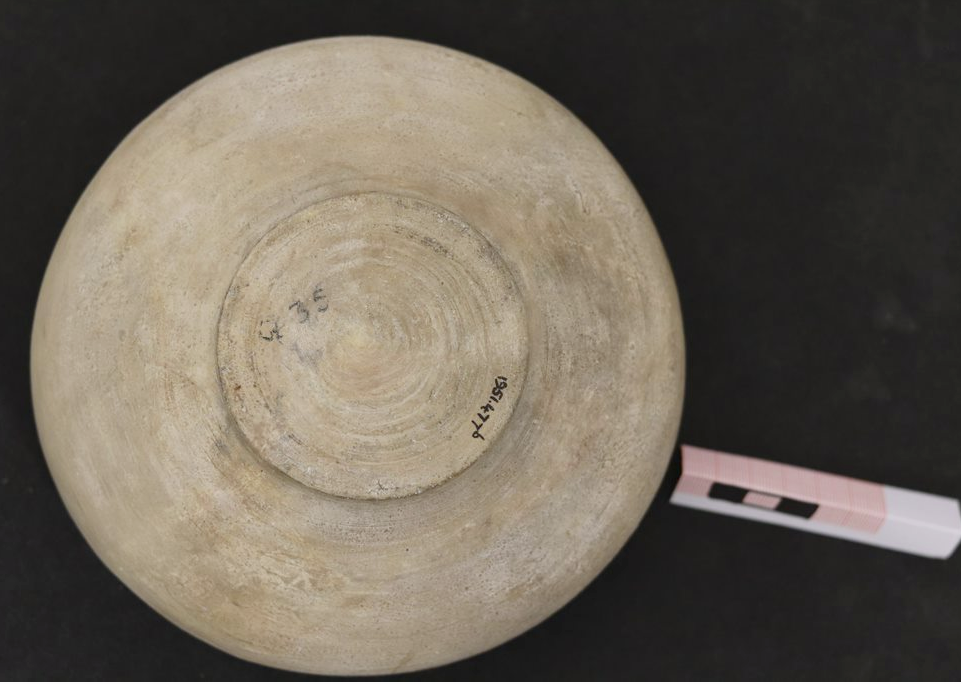 The team were also delighted that Isabella Bossolino, together with Sandra Jacobs, were able to  view the Qumran jar and lid (AN1951.477 and AN1951.477.b,) in the Antiquities Study Room at the Ashmolean Museum in Oxford. with the assistance of curator Dr Alison Pollard, following up on an examination of the jar previously undertaken by Joan Taylor. This pottery was drawn by Isabella for our project. Kindly note that images shown below  are copyrighted by the Network for the Study of Dispersed Qumran Cave Artefacts and Archives, and that they may not be used for publication purposes. Further photographs, drawings and examination notes on this and other materials in collections worldwide will shortly be available  on this website. 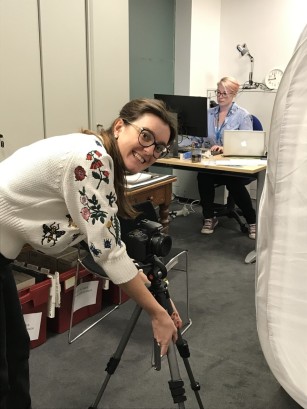 Some information relating to this acquisition has been published by Rebecca Abrams in Chapter 8. “Dead Sea Scroll Jar,” in The Jewish Journey: 4000 Years in 22 Objects From the Ashmolean Museum (Oxford: Ashmolean Museum, 2017), 57-63, where a photograph of the jar prior to its shipment from Jordan also appears. A copy of the Air France consignment note, identifying “jar with lid” is later provided on page 80 of the volume.

The Network has had the opportunity to visit the British Museum holdings of Qumran Cave 1Q materials on two previous occasions, and we are grateful to curator Jonathan Tubb for his assistance when Joan Taylor took photographs and examined the objects. These consist of a jar and lid, and also fragments of textile. On Tuesday 5 March Isabella Bossolino, accompanied by Dr Sandra Jacobs, examined and made drawings of the Qumran Cave 1Q jar and lid purchased by the British Museum from the Jordanian government. On this occasion the team would particularly like to thank Dr Christos Gerontinis for taking time out to lift, position, and assist us throughout our study. Kindly note that preliminary images shown below  are copyrighted by the Network for the Study of Dispersed Qumran Cave Artefacts and Archives, and that they may not be used by others for publication purposes.

Professor Marcello Fidanzio travelled to Paris to consult with conservation specialists at the Musée du Quai Branly, during which time he was further able to re-examine the jar at the Louvre & consult further with Monsieur Henri de Contenson, excavator of Cave 3Q, who was previously featured in our earlier post.

During November 2018, Professor Marcello Fidanzio gained access to view and examine the Dead Sea Scroll Jars and materials held at the Shrine of the Book Museum in Jerusalem together with Isabella Bossolino (shown below). The network is particularly grateful to curator, Dr Hagit Maoz, for her valuable assistance in preparing drawings and photographs of the pottery at this time.

With further assistance of Dr Emile Puech, the team were also given access to the jar and lid (assumed to have been found in Cave 11Q), which is currently held in the Kando Souvenir Shop in Bethlehem. This has facilitated the production of improved drawings and  photographic documentation. Both Adolfo Roitman and Hagit Maoz were extremely helpful  and were able to provide further details relating to the restoration of this jar to Professor Fidanzio. 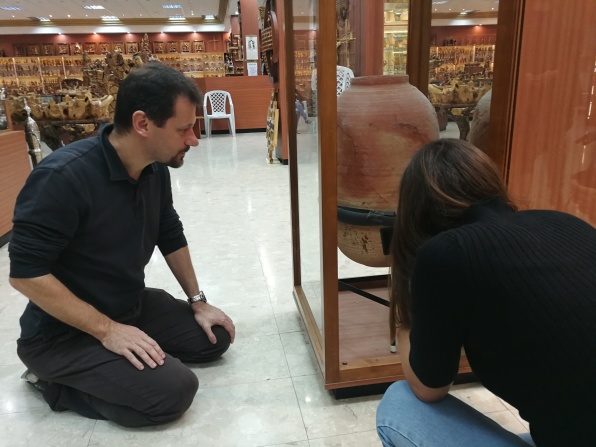 Thanks to Alexander Schick, to whom we are very grateful, we now have excellent pictures of the location of Cave 2Q. These are provided for any specialists visiting the Qumran area. The proximity of 2Q and 1Q is shown here also. If you wish to use these photographs, please contact Alexander Schick, Schick.Sylt@gmx.de. 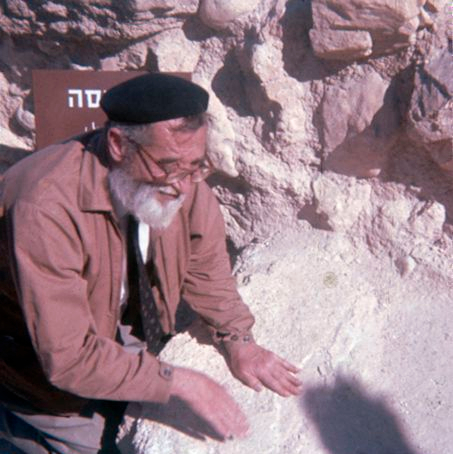 Now available on our photographic tab are the slides very kindly provided by the late  Prof. Philip R. Davies. Click here to see them, with captions by DQCAAS. We are particularly pleased to have a picture of Roland de Vaux demonstrating how the Qumranites did their laundry. There is also a very nice image of Crystal Bennett, then Director of the British School of Archaeology and close friend of de Vaux’s, with her two dachshunds. Along with these, there are views of the site before the visitors’ centre was constructed, though signage and pathways had been created. Cave 4Qa and Cave 4Qb had not suffered the erosion of the present time. These images are not only important for understanding the site, but to the keen eye they can play a part in telling the story of how excavation, weathering and developments for tourism damage the archaeology of a place of immense cultural heritage value. There is much more that could be said on this topic, but for now we simply graciously acknowledge the generosity of Professor Davies in allowing his slides to be made available. We deeply regret he is no longer with us.

In 2013 the Non-Professional Archaeological Photographs project (NPAPH) was initiated in order to preserve non-professional documentation of past archaeological campaigns to the future and make it accessible to the public via digital archives.

The term ‘non-professional’ refers to two categories of records. First of all records made by visitors or participants of excavations who were not part of the trained staff, but who assisted as part of their continuing education or out of interest; for instance students, volunteers, reporters or sponsors. Secondly, the term represents personal photos, slides or films made by the archaeological staff itself.

Unlike official documentation, which can be consulted in published reports and is kept in libraries, museums, archives and on the internet, documentation by non-professionals is generally not accessible to the public. Furthermore, it is possible that these non-professional photographs, slides or films have not always been stored in the best conditions over the years. Therefore, the NPAPH project makes efforts to secure and make accessible this valuable documentation category.

One of the NPAPH digital collections is the Khirbet Qumran collection. This collection consists of photos made by people with various backgrounds. These include the archaeologists Ann Searight (now also available at DQCAAS) and Dan T. Hughs who visited the site during their stay in the region. Lucas Grollenberg, a Dominican priest from the École Biblique in Jerusalem, joined Père De Vaux at his excavations at Tell el-Farah (north) and Qumran. There was also the 26 year old Dutch student for the priesthood Leo Boer who had the opportunity to study at the École Biblique for a year (1953-1954). Here he engaged in Biblical studies, joined the third excavation led by de Vaux at Qumran from 13 February till 14 April 1954, and participated in many archaeological excursions organised by the École Biblique (Wagemakers 2014, 2011). Although he didn’t care much for archaeology, he would – indirectly and decades later – contribute to the archaeology of Qumran (Taylor 2014).

The origins of this project began by chance. During a conversation which I had with Boer in 1999, he suddenly produced two photo film canisters from his pocket and told me that these contained the photographs he had taken while excavating at Khirbet Qumran with de Vaux in March 1954. In his own words ‘he never had the time to do anything with them’ and that is why he had stored the film canisters in a small box in his garage for decades. Some years later it occurred to Joan Taylor and me that these photographs could be of real significance for the archaeology of Qumran and decided to publish some of them in an article in the Palestine Exploration Quarterly (Wagemakers and Taylor 2011a) and to present all of them in a feature on the Palestine Exploration Fund’s website (Wagemakers and Taylor 2011b).

Boer’s photographs indicate the huge energy of the excavations at Qumran and their rapid progress, as well as providing evidence of obscure areas of the site. Besides, given the many controversies about the nature of the site and the interpretation of its material remains, any new data that sheds light on the excavations was welcome.

And it did! For example, the mud-brick, plastered ‘block’ of L.86-L.87 had been interpreted in diverse ways by different Qumran researchers. Thanks to one of the photographs made by Boer, it could demonstrated for the first time that the top of the central block in L.86 had a slight hollow. Furthermore, we were able to state that the blocks are not the bases for palm-log roof supports, since the fall of the burnt wood on the Period Ib floor in L.86 — evidenced in another picture of Boer — indicates that the flat roofs at Qumran were constructed with beams running across the widths of rooms, with palm logs laid on top.

As the significance of non-professional records is obvious, it must be no surprise that the NPAPH project tries to stimulate others to search for this kind of archaeological documentation; it would surely be a tragedy if all those substantial images of excavations in the past, including those of Qumran, will be lost forever…

Taylor, Joan E. 2014. ‘The Archaeology of Khirbet Qumran,’ in Bart Wagemakers (ed.), Archaeology in the Land of ‘Tells and Ruins’. A History of Excavation sin the Holy Land Inspired by the Photographs and Account of Leo Boer (Oxford/Philadelphia: Oxbow Books), pp. 149-165.

Wagemakers, Bart. 2014. ‘Leo Boer, a Dutch Student in the Near East (1953-1954),’ in Bart Wagemakers (ed.), Archaeology in the Land of ‘Tells and Ruins’. A History of Excavation sin the Holy Land Inspired by the Photographs and Account of Leo Boer (Oxford/Philadelphia: Oxbow Books), pp. 1-21.

Wagemakers, Bart. 2011. ‘A Forgotten Diary and Photograph Collection as Valuable Records for the Historical and Archaeological Study of Israel and Transjordan,’ Strata: Bulletin of the Anglo-Israel Archaeological Society 29:121-139.

For visitors to Qumran, there is often the question: ‘Where were the first Dead Sea Scrolls found?’ If you look around at the hills they are dotted with caves, and at first sight they look remarkably similar. Which is the right one? We are grateful to Alexander Schick, who has supplied a photograph of the rocky escarpment where Cave 1Q is located, with a red arrow, so that visitors can find the location without a guide. To enable easier identification in historical archive photographs, we also include an ASOR image (cropped) where we have placed a red arrow to show the location of Cave 1Q.

NB Archaeologists  normally add ‘Q’ after ‘Cave 1’. The Q is for ‘Qumran’ and distinguishes it as a scrolls cave, as opposed to a non-scrolls cave which is referred to without a ‘Q’. In addition, all the caves in the Qumran vicinity were numbered in the survey of 1952 in a sequence, and Cave 1Q is actually Cave 14 in this series. The archaeologists and scrolls scholars surely had their reasons at the time for two different numeration systems, but it has led to confusion and continues to do so. The cave designated ‘Cave 1’ in the 1952 survey (with no scrolls in it) is actually further north.

Team members are delighted to share Dr Dennis Mizzi’s recent publication, “Qumran at Seventy,” which appeared in Strata: The Bulletin of the Anglo-Israel Archaeological Association (2017): 9-45. Many thanks to Dr David Milson, and the society’s editorial committee, for allowing the network to reproduce this article here: Mizzi_Qumran@70